Heaven help us, or there will be War in America

There is no winner, we are all losers in a corrupt system, where only criminals, and traitors can be elected president.
While I would not want to see a civil war in America, I would also not be surprised if America witnessed a new revolution, or a civil war in this coming year. When the Republicans and Democrats attempt to use force against people who say “enough is enough”. All the same, the Republicans and Democrats have paved the way for the demise of America with their behaviour. I am also in agreement that voluntary association as well as the right to self-determination is as American as the apple pie. Have you tried to buy a bag of rice lately?
The food riots are coming sooner than you think.
Posted by Walt at 2:02 AM

Walt
I'm known to some as the Keeper. Orignally from Columbus Ohio, I now reside in Winchester Kentucky. 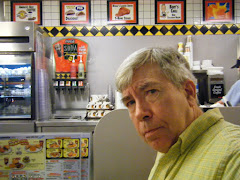 The beast of Waffle House